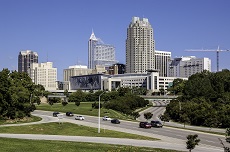 Raleigh Healthcare Information Technology (HIT) Recruiting experts align passionate IT talent with IT jobs. Our IT recruiters in Raleigh for information technology and IT Healthcare personnel deliver results quickly. We have experience recruiting IT Professionals that have experience with ICerner, NextGen, Meditech, Eclipsys, Siemens, McKesson, SoftMed, Epic. Click here to view our jobs.

Sample of Raleigh area IT job opportunities for which we are recruiting:

Raleigh is the capital city of North Carolina. Raleigh is located midway between the Blue Ridge Mountains and the Atlantic Ocean. Raleigh is known as the “City of Oaks” for its many oak trees, which line the streets in the heart of the city. Financial services, electrical, medical, electronic and telecommunications equipment are part of Raleigh’s industrial base. The National Hockey League’s Carolina Hurricanes moved to Raleigh from Hartford.